_a wandering spirit finds solace through a lens in a global passage.

There I was on an island, most misunderstood and frozen in time. During my two weeks in Cuba, I spent days combing the narrow and curious labyrinths of cities filled with pastel shaded residences, silent ladies and gents dangling cigarettes from mouths_ peering through broken windows while children played in streets well past bedtimes. I delighted in these brief moments as I, too, peered into ground floor dwellings and caught glimpses of family gatherings around old TV’s. There were the bucolic landscapes of Vińales and its small wooden houses with porches, tobacco fields, and tour stops selling the questionable aromatics of cigars, amid pastoral settings that invited me into mysterious caves. Not to forget, the intoxicating seas that bathed tan bodies while kissing the shorelines of the whitest of sand. And, of course, I relished my strolls along Havana’s Malecón_ the delightful promenade and seawall where gatherings and Caribbean songs thrive.

Everywhere I ventured, I was reminded of the undercurrent of unresolved conflicts and economic woes which still hold generations captive. Yet, I was greeted with smiles and warmth wherever I danced, as the island’s playful and sensual music led me beat after beat. It was all beautiful.
My journey included a 4-hour drive from Havana to Trinidad de Cuba_ a long stretch of solitude through a maze of bumpy roads and interior outposts to the island’s south-central region. Thirst needed to be quenched, so quick road stops were made. The signs posted for Trinidad, the Unesco designated city (1988), were increasing and, once again, I was delighted to start another adventure_ one that included the Plaza Mayor and the Casa de la Musica, where evening draws locals and tourists alike to the pulsating rhythm of salsa bands.
After a quick drop off and check in at the private homestay of choice, I managed a few localities while I steadied myself from the unevenness of massive stones filling the terrain. It was grand to observe the landscape of  Trinidad_ different and slower than Havana, yet the same reminders_  local color offerings; coffee stops, ‘50s convertibles tending to the demands of tourists competing alongside my fav_ odd bicycles with seating for 3 speeding by. It wasn’t long before it was time to close the book on the excursion for the day to seek much needed shade. With a bit of help, I found my way back to Casa Muñoz, which was my vacation stay in Trinidad de Cuba.

Delighted to melt into comfort from the great heat that sweated equally across my body, I soon was ensconced in a wonderfully charming and venerable mansion. Señor Julio Muñoz entered the great room. After light conversations and a short history of how he and his wife Rosa had created this stunning casa particular (a home licensed for a tourists’ stay), Muñoz, a native son of Cuba, noted his linage included generations of prominent Spanish immigrants. I wandered around and admired the old-world furnishings_ a mixture of beautiful colonial and baroque styles, filled with delicate antique curios as carefully placed accents. Featured in National Geographic magazine, this casa particular's charm is wildly touted as “one of the best places for the foreign traveler.” It was enchanting and cozy_ even with spacious parlors, grand lounges, and inviting patios. Nearby, one can also enjoy the specialties at Muñoz Tapas_ a lovely eatery with a variety of platters and drinks_ Cuban and international flavors, to be savored along with incredible views from the rooftop dining.
The sun on that February day had no boundaries, casting slivers of light through casements on other visitors who slipped in from guidebook itineraries to find relaxation in Casa Muñoz. We compared notes. Some had signed up for activities that Muñoz organized, which included escorted and detailed itineraries_ designed to entice the visitor with a multitude of excursions and day trips, Others meandered and were gratified with museum visits, flea markets or café settings featuring eclectic architectural styles along with a Cubanito_ a rum bloody mary. 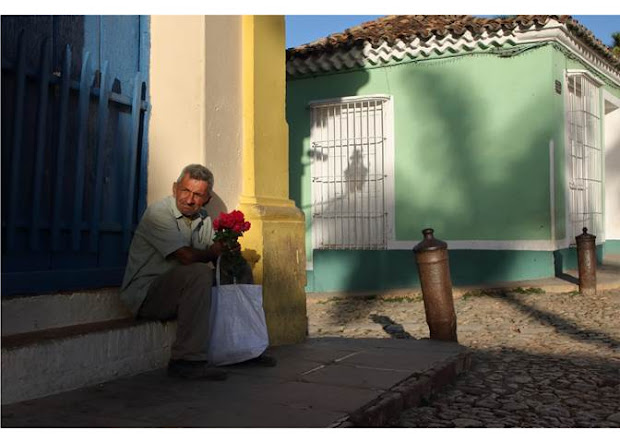 _there was a slight breeze. it was splendid.

Señor Muñoz’s appeal was evident. As we listened to the novel ideas of his ventures, we learned of his notable successes which have caught the ear of Cuban as well as foreign dignitaries, and visits and interviews from journalists_ U.S. to Australia. Listening intently, I note that his character and resolve is ever present, seeking opportunities wherever and whenever. Like many Cubans growing up after the 1959 revolution, he was forced to reinvent himself_ quite necessary in the changing and challenging Cuban economic landscape. Trained as an electrical engineer, he found passion in the raising of horses. A horse-whisperer_ one phrase that suited him well. “Reinvention is key,” he explained. It was his credo, and it served him_ as each venture bore the fruits of his labor. 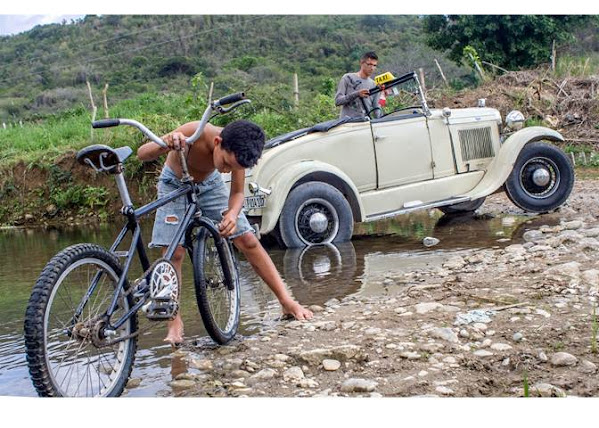 The love of the photographic medium fascinated Muñoz since childhood, so the genre of Street Photography in Trinidad was a natural direction and creative outlet for him. This form of photography, also known as candid photography is so applicable, since it is the essence of the social and cultural lifestyle of Cubans. One is drawn into the daily life and into the unmediated chance encounters and random incidents occurring.
“I knew photography was something I was interested in, but getting hold of a camera in Cuba is not easy,” he sighed. Muñoz continued and explained how his ability to recognize a greater vision_ one that included seeing something that few other people in Cuba had considered, was the potential for photographs to connect with an overseas audience hungry for nostalgic images from a place so isolated. “I got great money for the first photos I sold to National Geographic Travel magazine. It helped pay for this lens.” The rest is history.
The American literary artist Susan Sontag wrote, “the photographer is an armed version of the solitary walker reconnoitering, stalking, cruising the urban inferno, the voyeuristic stroller who discovers the city as a landscape of voluptuous extremes. Adept of the joys of watching, connoisseur of empathy, the flâneur finds the world "picturesque." The street photographer can be seen as an extension of the flâneur, an observer of the streets. This is Julio Muñoz’s oeuvre. 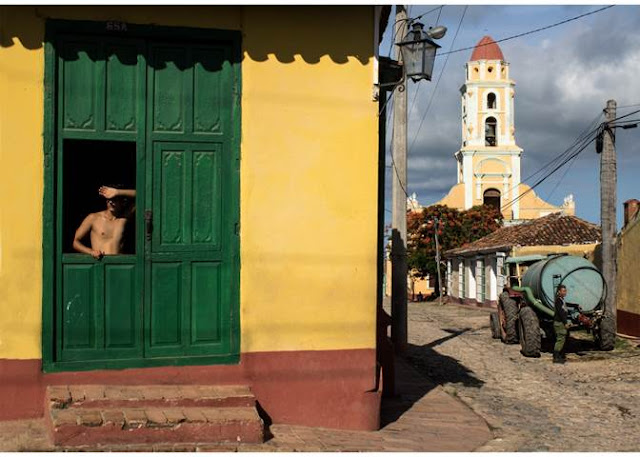 I have noted in text before, that I always believe the immersion in faraway spaces offers a multitude of creative possibilities. The opposite of what is familiar nourishes primal curiosity. It is these ethereal adventures that feed the soul and survive through imaginative devices. Compelling imagery and the birth of self-expression emerge in the mind’s eye through the arts_ literature, music, painting, and photography, as well language, cultural exploration and customs. Creativity allows for descriptive prose, storytelling, and visual landscapes that may or may not be understood by the viewer, yet are still captivating when discovered. Creativity is poised and ever-present, complete with different sounds and shapes_ odd and uneasy at times_ revealed in glorious notes, phrases, and cast on a multitude of surfaces as artistic expression.
Muñoz's immersion in the arts is evident_ identified as the creative cowboy_ the “John Wayne” of photography. It defines his style. His approach is fast, as he shoots from the hip. Very western, no doubt. And I see a man who is comfortable, easygoing and self-assured. 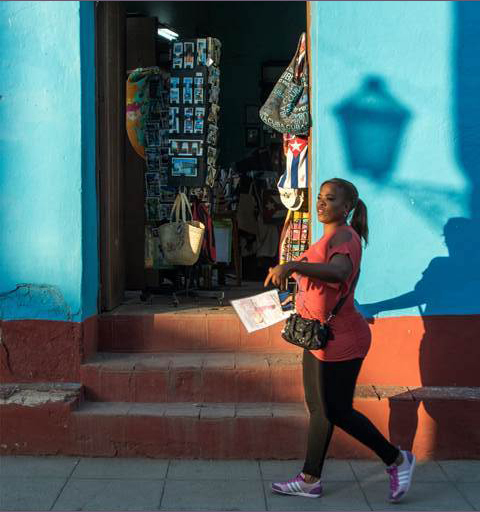 "Minutes in Cuba": Trinidad Street Photography_ www.farflungtravels.com (tag Julio Muñoz) follows Muñoz on his hunt as he reiterates his mantra_ “Anticipation. Anticipation”_ another secret to those who take his tours. And, here again, his John Wayne mode is always ready for the quick! “We are hunting right now. I predict the path my subject will take, then I focus on the ground where I want him. I put down the camera and don’t put it back up to my eyes until the last moment.”

Ah, what better way to learn than to delve into Muñoz’s summarization of “Trick and Techniques to Achieve Better Street Photography”_ comprehensive pages of information that cover a multitude of subjects, and a gift for everyone who signs on for the photography tours/workshops. It is a checklist to ensure that one understands the nature of street photography and begins with a consideration of facts. They include the reasons behind settings, subject movements, and the nature of street photography, and its ability to capture reality. His guidance continues with advice on cameras and lenses, camera settings, as well as a list of steps to follow for capture.

_ on a final note muñoz adds,

“A significant part of street photography is enjoying the act of taking photo, feeling the adrenaline, the challenge; developing an eagle eye to discover from a distance the good shot. You are hunting_ but with a camera instead of a rifle. If you feel this joy, it is because you are on the way to getting good photos.”
for further information and details on tours, lectures, photo workshops, and a wonderful stay: 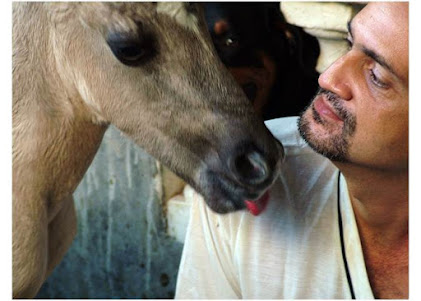 The opportunity to speak with Julio was fortuitous. So, thank you Señor Muñoz for sharing. As a photographer, as well, images are our documents_ perhaps our notes on a journey. They are moments in time and preserved in digital capture. I treasure them, as for the days when I forget the details of my life. _ Renay Elle Morris